Description of a new species of Chrysina Kirby, 1828 (Coleoptera: Scarabaeidae: Rutelinae) from resplendens group, based on morphological characters and mtDNA COX I molecular marker

Introduction
The genus Chrysina Kirby, 1828 (Coleoptera: Scarabaeidae: Rutelinae) contains about 120 species (Hawks, 2017; Moore et al., 2017). The genus is widespread in the North of C. America (starting from Texas, Usa) to the North-West of South America (Columbia, Ecuador). Some contemporary Chrysina were previously known as Plusiotis and Pelidnotopsis. Currently these genera are placed into synonymy under the older name, Chrysina (Hawks, 2001). According to D.C. Hawks (2006), there is a group of species morphologically closely related to Chrysina resplendens (Boucard, 1875): Chrysina chalcothea (H. W. Bates, 1888), Chrysina cupreomarginata (F. Bates, 1904), Chrysina resplendens (Boucard, 1875) and Chrysina tapantina (Morón, 1992). We assumed that new species belongs to this group and is similar to C. resplendens (Fig. 1–3). C. resplendens was described from Costa Rica, San Jose. The species is also known from other localities of Cordillera de Talamanca from Costa Rica and Panama. New species and C. resplendens occur in Panama sympatrically. In this article we compare the new species with C. resplendens and C. cupreomarginata because they appear to be the closest morphologically.

Material and methods
About 70 specimens from the resplendens group were available for the study in research collections of the first and the third authors, the “Museum für Naturkunde - Leibniz Institute for Evolution and Biodiversity Science” (Berlin, Germany) and private collection of V.A. Kalinin (Russia, Moscow). For morphological examination the authors used stereo microscope Zeiss Stemi 2000-C. Tissue samples (abdomen tergites) were taken from 14 specimens of Chrysina for DNA analysis, and for comparison and estimation of the pairwise distances. The results were deposited in BOLD public project data records – see the Published Projects section of BOLD (Ratnasingham & Hebert, 2007; www.barcodinglife.org).
DNA was extracted using the standard phenol-chloroform method (Sambrook, Fritsch, & Maniatis, 1989). Amplification reactions were carried out according to BOLD protocol with minor improvements in PCR thermal regime algorythm in the final volume of 25 μL with 12.5 pmol (or 0,5 pmol/µL) of the primer LCO1490 (5'- GGTCAACAAATCATAAAGATATTGG-3') and 12.5 pmol (or 0.5 pmol/µL) of the primer HCO2198 (5'-TAAACTTCAGGGTGACCAAAAAATCA-3') (Folmer, Black, Hoeh, Lutz, & Vrijenhoek, 1994), 0.1g of the isolated DNA and the universal Encyclo Plus PCR kit (Evrogen, Moscow) following the manufacturer’s protocol. PCR was performed in a T100 thermal cycler (Bio-Rad, USA). The PCR thermal regime consisted of an initial denaturation of 4 min 30 sec at 94°C; five cycles of 30 sec at 94°C, 20 sec at 45°C and 1 min at 72°C; 35 cycles of 30 sec at 94°C, 20 sec at 55°C and 1 min at 72°C, and a final extension of 5 min at 72°C. Amplification success was checked by electrophoresis in 1.5% agarose gel with subsequent identification of PCR fragments under UV light after staining with ethidium bromide. The section of mtDNA is standard “barcode region” of the Cytochrome Oxidase subunit I gene was sequenced using the above primers LCO1490 and HCO2198 at the Evrogen laboratory (Moscow). DNA sequences were verified, aligned and analysed using MEGA version 6.0 (Tamura, Stecher, Peterson, Filipski, & Kumar, 2013). The maximum likelihood method (Tamura-Nei model) was applied for estimating of divergence. For estimating branch support bootstraping was carried out. Bootstrap values above 70 (expressed as percentages of 500 replications) were shown at branch points of the likelihood tree.
The sequences deposited in the BOLD database are shown in Table 1.
Table 1. Specimen data, sequences and images deposited in the BOLD project database
(http://www.boldsystems.org).

Abbreviations. The following abbreviations are used to indicate the location of the paratype specimens: 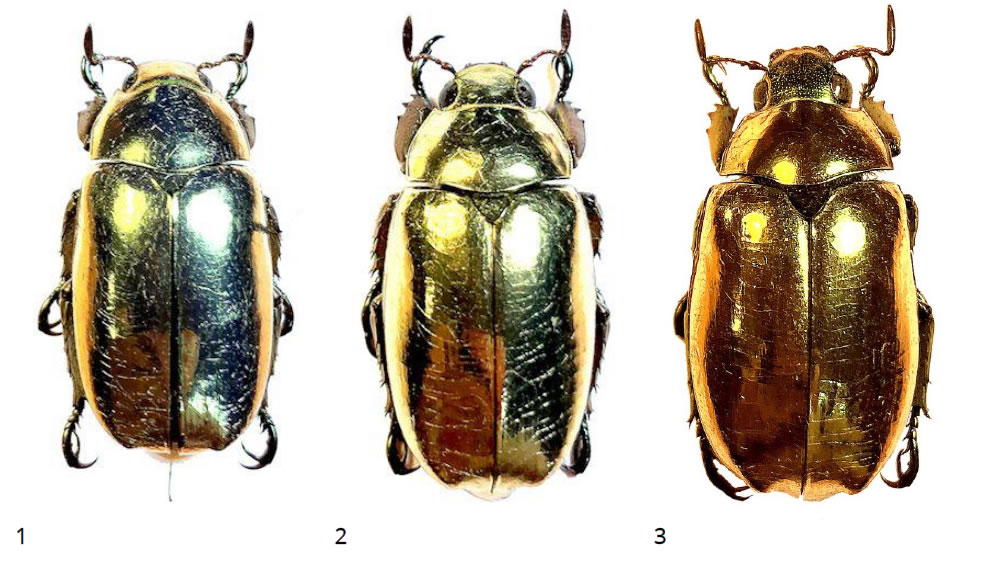 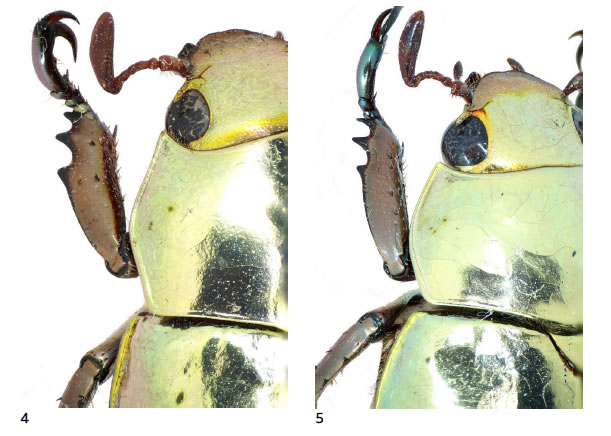 Fig. 4-5. 4. C. kalinini sp.n., male Holotype: pronotum (BOLD sample ID BC-Ivsh-5482-X23); 5. C. resplendens, male: pronotum
In comparison by molecular markers (mtDNA COX I “barcoding region”), C. resplendens, C. cupreomarginata and C. kalinini demonstrated strong divergence. A maximum likelihood tree based on 14 DNA barcode sequences of the new taxa and those of their putative closest relatives in the genus is shown in Fig. 13. Sequences ranged from 500 to 700 bp (sequences shorter than 500 bp were excluded). In the Table 2 the number of base substitutions per site from averaging over all sequence pairs between groups are shown. Standard error estimates are shown above the diagonal. Analyses were conducted using the Maximum Composite Likelihood model (Tamura, Nei, & Kumar, 2004). The analysis involved 14 nucleotide sequences. Codon positions included were 1st+2nd+3rd+Noncoding. All positions containing gaps and missing data were eliminated. There were a total of 612 positions in the final dataset.
According to the average values of the interspecies pairwise comparisons and the tree topology (Fig. 13, Table 2), Chrysina kalinini sp.n. reliably differs from its closest relatives, and molecular divergence of these three species is in concordance with their morphological divergence.

Table 2. Interspecies pairwise distances: the average values for number of base substitutions per site between sequences estimated as the divergence over sequence pairs between groups. Standard error estimate(s) are shown above the diagonal.

Etymology
The species is named after the Russian collector Valentin Alexandrovich Kalinin (Russia, Moscow), who organized the research on this group and who supported a number of research expeditions which were crucial for this study.

Acknowledgements
We would like to express our heartfelt appreciation to the following colleagues: our good friend Pavel Udovichenko for valuable comments, literature and specimens for the study; Dr Vadim Krutov for reviewing the manuscript; Valentin Kalinin for lending us specimens. The work was carried out with the financial support of the Basic Research Program of the Presidium of the RAS "Biodiversity of natural systems" No. 29 Section "Genofunds of living nature and their conservation".

References
Boucard, A. (1875). Monographic list of the Coleoptera of the genus Plusiotis of America, north of Panama, with descriptions of several new species. Proceedings of the Zoological Society of London, 117–125, plate 23.

Hawks, D. C. (2001). Taxonomic and nomenclatural changes in Chrysina and a synonymic checklist of species (Scarabaeidae: Rut.linae). Occasional Papers of the Consortium Coleopterorum, 4, 1–8. 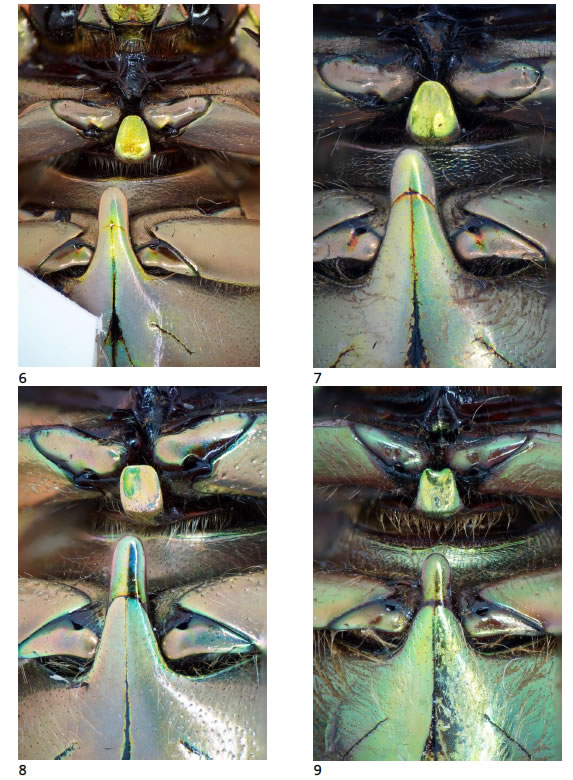 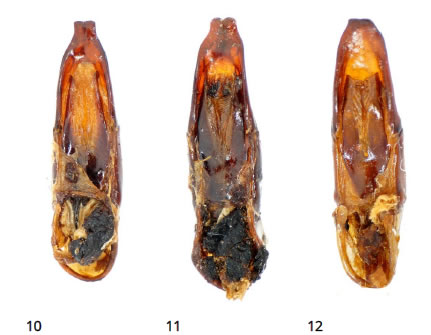 Fig. 13. Maximum likelihood tree of the studied Chrysina. Bootstrap support values of > 70% are indicated near the branches (500 bootstrap replicates).