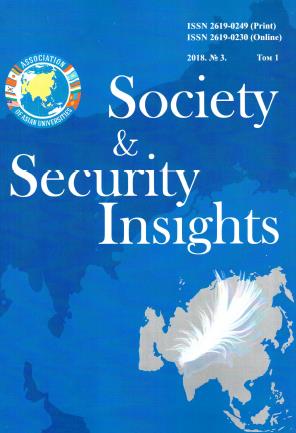 The relevance of the theoretical understanding of the social security system of the Russian Federation in the context of increasing the importance of migration policy is justified by the presence in recent decades of avalanche-like growth of migration flows in the vast majority of regions of Russia. Scientific problems are caused by insufficient development of the problem of implementation of effective migration policy, which would contribute to the optimal adaptation and socialization of migrants. The purpose of the development of an optimal and complex system of migration policy was to identify its basic components and factors contributing to the social adaptation of visitors and local population in the modern Russian society. The description of the socially oriented model of migration policy is presented, the analysis of its importance and efficiency on the basis of synthesis of modern macro-micro sociological theories is carried out. The analysis of the system of migration policy, the results of which are presented in the article, is based on the basic foundations of the structural and functional approach, the essence of which, in the context of the problem of migration, is the transforming role of social mobility of the population, providing socially important functions of migration in modern society. The fundamentals of post-non-classical sociological theories describing the determination of migration by co-dependent development of prosperous and economically backward regions are used The design of the presented system includes a qualitative analysis of the synthesis of institutional, group and individual components of migration processes in Russian society. It is concluded that socially oriented migration policy should be based on the support of effective ethnic self-identification, reducing the level of migrant phobia, the formation of tolerance, emphasizing national values. To stimulate human rights activities, democratic institutions of civil society. The scientific novelty of the proposed system lies in the study of migration adaptation strategies of migrants in the context of interdependence of subjective behavioral dispositions of migrants and objective globalization processes. The practical significance lies in the possibility of using the components of the security system for effective social management in the field of migration policy.