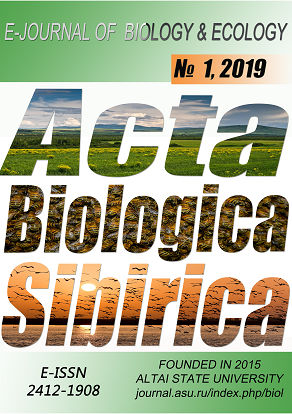 Some 49 species of woody plants were identified among the tree plantations in sanitary protection zones of industrial enterprises in Zaporizhzhya (southeastern Ukraine); 10 species of tree plants are present in all the sanitary protection zones. The number of plant species in protective plantings varies considerably from 11 ("Zaporizhskloflus") to 30 species ("Zaporizhstal"). The similarity of the species composition in plantations was assessed using the Jaccard and Sørensen indices. We calculated the species richness by Margaleff and Shannon indices, the dominance indices were calculated according to Simpson and Berger-Parker. The vast majority of forest belts in the sanitary protection zones of Zaporizhzhya industrial enterprises require the species enrichment, taking into account the tolerance of species to various pollutants.

In nature, the creation of infra‒specific difference can occur through a wide range of mechanisms such as local adaptation, phenotypic plasticity, parental conditions and artificial selection [22]. West-Eberhard [23] has believed that when it is resulted from plasticity, features can differ rapidly within generations and vary drastically across populations in dissimilar habitats. Recently, studies have broadened in the identification of variation to incorporate the considerable phenotypic difference within and among populations of the same species [22].

Investigations have showed that difference of phenotypic feature within species can be as extreme as the characteristic difference across species [1]. Moreover, infra‒specific difference may influence structure of community and function of ecosystem as much as difference among species [6,14].

Salvia limbata is an aromatic herb of Lamiaceae that grows naturally in various regions of Iran and some neighboring countries [7,16]. Different flavone compounds such as ladanein, salvigenin, luteolin 7‒methyl ether, cirsiliol, eupatorin, luteolin 7‒O‒glucoside and rosmarinic acid were isolated from extracts of this plant [5]. Moreover, Saeidnia et al. [17] have suggested that S. limbata can accumulate tryptophan, sterols and their glucosides, therefore, consumption of this plant as an herbal tea or other preparations might be useful for dietary deficiency of this amino acid. In mice, S. limbata has beneficial effects to decrease dependence sign produced by morphine and increase in pain threshold compared with the control [2].

Although, comparative infraspecific anatomical [12] and phytochemical studies [10,13] have been performed in this species, as far we could search, no infra‒specific morphological investigation is available for its populations.

In current study, eight natural populations of S. limbata were harvested from different regions of the country (Table 1), and were identified according to descriptions provided in Flora of Iran [8]. Morphological differences were carefully evaluated for reproductive organs from collected samples of the studied populations. The morphological characteristics of flowers were studied under dissecting stereo microscopes. For morphometric analysis, 80 plant specimens from 8 populations were used. Voucher specimens were deposited at Herbarium of Arak University.

Morphometric data was subjected to one‒way analysis of variance (ANOVA) to determine if significant difference existed among populations for each feature measured. Mean and standard deviations of characteristics were tacalculated. These analyses were performed using SPSS ver. 17. Cluster analysis was carried out based on quantitative features using UPGMA, PCO, PCA and C.A‒Joined plots clustering in Multivariate Statistical Package (MVSP) program [15].

The mean and standard deviation of the studied morphological variables were presented in Table 2.

Fig. 4. PCA plot of the studied populations based on morphological characteristics.

Wherever the population’s habitats are the same, the morphological characteristics of populations will be similar, regardless of geographical distance of populations. Studies of population on the pattern of variation in several plant species have revealed the existence of localized populations each adapted to the particular environmental conditions of their habitat [3].

These authors propose two main possible reasons for this similarity, despite the existence of a long geographical distance. The genetic similarity is the first possible case, Sheidai et al. [18] have suggested that the morphological similarity among populations may be due to genetic likeness, although, it is more important to know that phenotype and genotype are not necessarily tightly linked. For example, Liston [11] and Whitkus [24] have revealed high levels of genetic variations among morphologically similar populations of Astragalus sect. Leptocarpi and Carex pachystach, respectively.

What, unlike the long distance, has led to the similarity of populations is similarity of ecological conditions of habitats. This is well suited to the idea of ​​ecological mosaic. Jain and Bradshaw [9] have suggested that if a plant species encounters a mosaic of habitats while expanding its range, the selective influences of each habitat act in turn upon the whole available morphologic difference.

We evaluated inflorescence morphological characteristics among eight populations of S. limbata. Morphological traits highly differed among the populations and ANOVA test revealed significant difference among the populations. According to UPGMA tree, PCA and PCO plots, we found four primitive phenotypes, which were characterized by special morphological features. Two phenotypes were monotypic, while one phenotype consisted of two, and another one has four populations. The distribution domain of a species is not composed exactly identical ecological environments, but also a set of different environment with different ecological conditions. So species must adapt its phenotype structure in accordance with those conditions in order to be able to live under those conditions.